Not to be confused with President Ronald.

Died of a heart attack and gets revived as a monster by Skeletox (Airplane 3)
Fails to crash the plane (Airplane 1)
Shot in the face by a Player, destroying his dark side persona and resurfacing his light side persona (Airplane 2)
Reforms (Airplane 4)

The Monster, commonly known as "???" in the script and Ronald as a human, is the mislead central antagonist of the Airplane saga, who was being used by Skeletox until he had enough power to take over the world himself.

He serves as the mislead main antagonist of Airplane, Airplane 2 and Airplane 3, a cameo character in Cruise, and one of the three deuteragonists (alongside General Poncho and Doug) of Airplane 4: One Last Flight.

In the past, the Monster was a human named Ronald. Ronald was ruthlessly bullied in his youth, was never supported when he had problems, and had no friends. Later his parents died. He made a deal with Skeletox who promised that he would bring them back if he crashed a plane and if he failed his soul would be owned by Skeletox.

Additionally, as stated by Pilot Keilly, Ronald likes to read news on plane crashes since then.

Ultimately, this led him to create a plane crash himself. However, this ended up attracting the attention of the Robloxia States, who sent a group of soldiers, led by General Poncho, to stop him.

When the players board the hijacked plane, Ronald has already tied the rest of the occupants, and is heading to the cockpit to tuck the plane into a dive. The players untie the passengers and close in on the cockpit. One player then proceeds to talk to Ronald.

If the player chooses to be his friend, Ronald will agree to not crash the plane. However, he suffers a heart attack right after and becomes engulfed in fire as the plane fails. General Poncho will then risk his life to try and save him and the Captain. He managed to save Captain Joe, but Ronald was killed in the crash. It is unknown what happened to the General but in the Cruise Story Secret Ending, it is revealed he survived the crash. Sometime later, The Skeleton revived Ronald, this time, in the form of a dark spirit as a punishment for his failures.

However, if the player is not going to be his friend, Ronald will yell out in anger, and then be engulfed in the fire. He again suffers a heart attack in this time at some point during the crash. However, Poncho will leave with the players instead of helping Ronald, causing him to suffer and die. The government believes Ronald will not cause any more trouble, but this is false, as unknown to them, the skeleton that attacked the players earlier in the mission had revived Ronald, this time, in the form of a dark spirit bent on revenge.

Sometime during the events of Airplane 2, he managed to escape as he is partially free from his curse after being shot in the face. He encounters the players and General Poncho and told them about it. Ronald tried to stop Skeletox himself, but General Poncho still does not trust him. If the players chose to follow Ronald, they all will be captured and Ronald’s secret past is revealed, initiating the Sad Ending. If the players follow General Poncho, he then disappears shortly before the Maze Challenge. He is seen captured alongside Pilot Keilly and Jack. He apologizes for his actions and tells them to get away since it’s a trap. However Skeletox appeared before they escape, starting the Boss Battle. After Skeletox is defeated, they are freed and Ronald is fully freed. President Ronald celebrates the players for saving the day. When the players ask where is Poncho since he isn’t in the celebration, he claimed wherever Poncho is, he’s probably saving the world, ending the game and the Airplane series.

The Monster will start to enact its schemes to kill the players.

The monster does not appear for some time, but is implied to have cause other problems on the flight, including cutting the oxygen supply which forces the players to take oxygen masks, planting a bomb on one of the players, and leaving the Crew unconscious.

It then enters the cockpit, causing a commotion inside and rendering the Captain unconscious. After unlocking the door, it reveals that it somehow brought all of the passengers on the flight to kill them. It then disappears, leaving the players to find the autopilot button themselves to keep the plane in the air, as it has put the plane into a nosedive, though GPWS sounds are not heard.

Finally, it will spawn behind the co-pilot's seat when a player sits in it, telling them to crash the plane. If they do crash the plane, he will say that the other players were foolish to trust them, saying that they were always on his side, and the co-pilot proceeds to maneuver the plane into a nosedive. If they do not crash the plane he will say that humans are weak and leave to plan its next attack. But in the Bad ending, it is discovered that Ronald (As the Monster) might have mind control, as when the player on the co-pilot seat confronts the monster, and is asked to crash the plane, if they say Yes, then they will say, "This has to be done." Then Ronald orders the player to 'Take them home' The player on the co-pilot will say, "Yes master." Ending the story. Probably mind control.

The Monster works behind the scenes in disguise for the most part, only revealing itself well into the flight.

The Monster is first seen while the players are in the Presidential Bedroom, when the curtains are mysteriously drawn open. He will taunt the players for forgetting him, and send a wall of lava, forcing the players to the back storage.

After the lava passes, Pilot Keilly will have the players head outside and wait for her to open the cockpit. While they are waiting, the Monster appears and chases the players himself.

Once the players are safely in the cockpit, Keilly will reveal the Monster's partial backstory, inform him of his ability to morph into anything, and give them a revolver to kill it with.

Then, at the end of the game, the players are confronted by President Ronald and Agent. If President Ronald is killed, the monster will reveal itself and accuse the players of being the real monsters, take their souls, and crash the plane, killing everyone on it. If the gun is not used, the players are simply arrested. If the Agent is shot, the unmasked Monster will appear on the floor, presumably dead. However, its eyes still blinked, implying it may return in a sequel. This is true as in Airplane 4: One Last Flight he reappears as half monster, as you may have read before.

A portrait of Ronald as the monster is hidden on board Carnival Cruise. It can be found in a secret room accessed by climbing through a hole in the ceiling of a ventilation shaft connecting two cells in the ship's brig. Clicking on the portrait will give the player a badge, as well as generate some Cruise Bucks. Other than this portrait, Ronald does not appear and is not mentioned in Cruise.

Despite being the main misleading antagonist, Ronald has racked up some criminal records in his life and afterlife. However, these should be noted because of Skeletox's actions, so Ronald isn't fully responsible for these crimes.

If a player decides to activate the Be the Monster Gamepass, the player will become the monster in a special challenge.

The Monster/Ronald's is extremely malevolent, destructive, and heartless across all games, wishing to have revenge on a person when they seemingly did not do anything. This is especially true in Airplane, as evident by it speaking entirely in capital letters aside from the endings.

In Airplane 2, the Monster is more calculating, yelling less of the time and only revealing itself when most of the plane's occupants are seemingly asleep. However, its destructive side remains clear.

In Airplane 3, Ronald's personality is similar to the first game, but also shows a softer side, that Ronald was a lonely person trying to find a friend, hardening when there were none.

In Airplane 4: One Last Flight, in the Sad Ending flashback, Ronald is revealed to have done so many evil things to save his own mother and father, as well as himself, as Skeletox would take his soul if he failed his instructions. 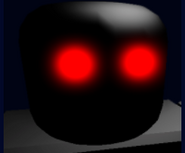 Ronald's Cameo as a painting in Cruise