Airplane 4: One Last Flight
Skeletox, commonly known as "???" in the script of Airplane 3 or as The Skeleton/Giant Skeleton, is the true main antagonist of the Airplane saga, who was using Ronald until he had enough power to take over the world himself.

In all of his appearances, Skeletox appears in the form of a human Skeleton. In Airplane 4: One Last Flight Skeletox wears a black hooded jacket and black trousers, with red lines on his jacket, trousers and sleeves. His skull and hands are his only bones visible in this appearance.

In Airplane 3, Skeletox does not wear any clothes, instead having a visible ribcage.

Skeletox first appears in Airplane 3, where he tries to kill General Poncho and The Players with a wall of fire, but they dive back into the plane. The skeleton is also presumably responsible for the thunder storm that nearly disabled the right motor of the Green Propeller Plane.

When General Poncho asks the pilots of the military plane whether the skeleton is gone, they say they didn't see a skeleton. In the Bad Ending the skeleton turned Ronald into a monster suggesting that Ronald is not the bad guy, as he might be partially mind-controlled.

In Airplane and Airplane 2, Skeletox does not appear nor is mentioned, but he was still behind the monster Ronald's attack on the plane and the presidential plane.

In Airplane 4, this suspicion is confirmed to be true. After Ronald was shot in Airplane 2, he became partially free allowing him to try and destroy Skeletox.

But he fails and Skeletox puts him in a cage. It turns out he has just been using Ronald until he had enough power to take over the world himself.

In the Airplane 4 Good Ending

The players and General Poncho manage to destroy Skeletox, freeing Ronald, Doug, and all the others infected.

In the Sad Ending

The Players have a flashback to when Ronald's parents died. Skeletox then appears and strikes a bargain with Ronald, saying he will revive Ronald's parents if Ronald agrees to destroy a plane and kill everybody inside, but if he fails he will claim Ronald's soul.

Skeletox is cruel, malicious and sadistic, and perhaps the most evil character in Ponchokings' games. He quite clearly thinks of humans as only a food source. In Airplane 3, Skeletox is mysterious, but in Airplane 4, Skeletox is very open about his plans and intentions, to the point of overconfidence. He is also manipulative, using Ronald, who was loyal to him only as a means to an end for him to consume souls. Arguably, Skeletox has no redeeming qualities. 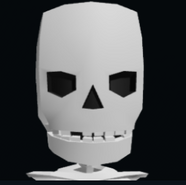