Chef, The Players (If they mess up), The Monster/Ronald (formerly), Skeletox (indirectly)

Not to be confused with The Monster/Ronald.

Ronald Trump's design was supposed to reflect off of Donald Trump's look. His face uses the "Grr!" face from the Roblox Categories. In Airplane 2 his body was the Blocks Body set before using the Boy's Body set in Airplane 4. In Airplane 2 and Airplane 4 during its release, Ronald donned a red tie, but within an update to Airplane 4, changed it to a black tie.

In Airplane 2 The Players are invited aboard Ronald's plane, the 911 Presidential Aircraft, as a reward for saving the plane in the Airplane Good Ending. The president is first seen in person for the meal segment. He greets the players with a "BUILD THAT BRICKWALL!" and quickly apologizes. He invites them to sit down and enjoy some soup, only for the nearby agent to inform him that the chef isn't finished. Ronald then orders the chef to be thrown off the plane, and choose a random player to finish the soup or be thrown off too.

After the meal, he heads back to his office. After the player unlocks the door, he will ask them to find the keys to his bedroom and allow then to sleep in it.

Finally, he is seen after a player grabs the pistol, and appears alongside an Agent. If the player decides to shoot him, he will lie dead, and it is revealed that he wasn't the monster.

After defeating Skeletox in the Good Ending of Airplane 4, President Ronald makes a speech congratulating the players for their heroism.

Ronald's personality is a Jekyll and Hyde situation. If Ronald is not mad, he is actually quite nice and polite. If he is mad, which according to the agent, happens easily, and he essentially becomes insane, as he ordered his agents to have the chef to be thrown off the plane. 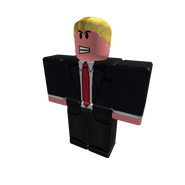 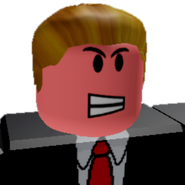