When the player successfully drops the necklace

When people steal his treasure

Cruise
Captain Greenbeard (commonly known as Greenbeard) is the main antagonist of Cruise, hunting for the Players to surrender the Golden Necklace before he sinks the ship.

Greenbeard's main personality traits are his avarice and his greed. He lusts obsessively over the Golden Necklace that Captain Smith stole from him, and would do anything to retrieve the necklace, including putting other lives at risk.

Greenbeard is also something of a hypocrite, in that he often calls The Players greedy and selfish for not returning his necklace, when he himself is greedy and obsessed with treasure, and there was no opportunity in which the players could have returned the necklace.

Greenbeard is the captain of a ghost pirate ship, the Darkpearl. Captain Smith, the captain of Carnival Cruise, stole a golden necklace, a piece of Greenbeard's cursed treasure.

Greenbeard first appeared in the Live Event of Cruise where his shadow appeared saying "MINEEEEEE! YOU ARE HIDING SOMETHING! NOW YOU WILL BE CURSED! ARE YOU READY FOR THE WORST VACATION OF YOUR LIFE?"

At night in the Staterooms players see Greenbeard's eerie pirate ship outside the window. Soon after the power goes out on the Cruise, and Greenbeard gets inside the ship. In the corridor the players see a shadow of Greenbeard. When the players go to the bathroom to find the keycard to the Electricity Room for Jack, a crew member on the Cruise, they see the message "Give it back", graffitied on the wall. When the players tell this to Jack, they return to the bathroom and find the message has disappeared. Greenbeard next appears the following morning, when the players go to the Arcade Room to meet Jack. Suddenly, all the machines turn off, and Greenbeard is seen standing in the doorway, where he tells the player to "Give it back". Greenbeard's Ghost Pirates then chase the players about for a time, before disappearing. Greenbeard tells the players to throw the golden necklace in the water, otherwise he will sink the cruise ship. 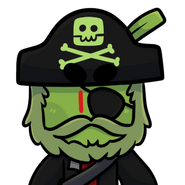