Airplane 3
General Alex is a fictitious Roblox character created by Ponchokings, he is a Robloxia States Army general. He is a minor character in the game Airplane 3. He is good friends with the character General Poncho.

General Alex is seen at the landing area after the players parachute out the plane, and his dialogue is different depending on which ending the players got.

In the Bad Ending General Poncho informs General Alex that both Captain Joe and Ronald perished in the plane's explosion, which General Alex says is "a shame". General Alex then says that at least Ronald will not come back to haunt anyone else, an ironic statement. 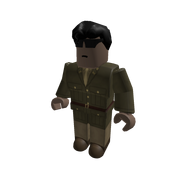 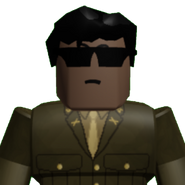