Today I turn 18. Our families used to say we would be free before this happened. Today I woke up. And nothing feels different. Today, I don't feel like waiting anymore.

Escaping, Being Evil/Cruel especially to the Players

Being Trapped in a Castle

Diana is a major character in Castle and the hidden main antagonist of the story.

Diana and the players were locked in the castle for an initially unknown reason.

The story starts on Diana's 18th birthday. She was promised to have freedom by then, so she decides to take matters into their hands and escape themselves.

She accompanies the players up to the Crystal Ball, where she is captured.

She is then seen suspended above the Cursed Gold Challenge and instructs the players to use the lever to free her.

Afterward, she accompanies them up to the Dragon, her fate from that point depending on the outcome of the Endgame.

If the player kills the dragon, Diana leaves the castle first, then shuts the gate, locking the players inside, revealing her true nature as a witch before leaving.

If the Dragon is not killed, Diana is unable to dodge its fire and is burned and killed. The Dragon then reveals that she was a witch.

Diana initially acts very friendly nice to the players, encouraging and giving them directions prior to her capture.

Her true personality, however, is very decisive, cruel, and cunning, having been using the players for her own will. 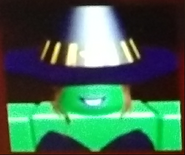